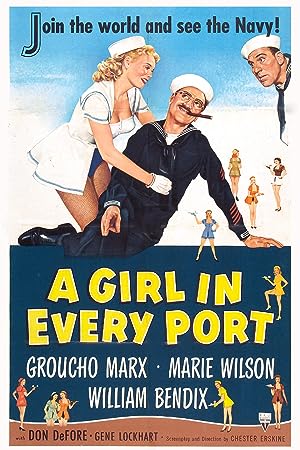 A Girl in Every Port

Synopsis: After two sailors are conned into buying a lame race-horse, they go ashore to sort out the problem, but when they realize that the horse is one of a pair of identical twins, their plan for revenge becomes more complicated.
Genre: Comedy
Director(s): Chester Erskine
Actors: Groucho Marx, Marie Wilson, William Bendix, Don DeFore
Production: RKO Pictures

So's the cluck. Don't tell me you fell

for that after we did it ourselves.

He's a counterfeiter as well as a horse?

- I bought him in an auction, a guy took me.

- Took you is right.

Don't tell me it was Buffalo Bill.

I was Buffalo Bill, remember, and you were

And when I told him about Aunt Gussie, it

turns out him and her was old friends too.

- You two oughta get together sometime.

Now then, at ease.

So he was Aunt Gussie's friend?

Yeah, he was almost my uncle too.

And stay at attention until I finish.

The fact is, somebody swindled

Seaman Dunnevan out of his inheritance.

Naturally, we can't have our men

made the victims of every bunkum artist

who think the US Navy is fair game.

Take charge of the matter.

You'll get a five-day leave from the brig.

When you have concluded the mission,

you'll return to the brig for your sentence.

During the past 20 years in which

it has been my unhappy lot

to have you under my command,

there have been entrusted to my keeping

In this, for instance, is the entire

report of the Battle of Wake Island.

destruction of a Japanese taskforce

off the coast of Okinawa.

And in this, the record of the sinking

of an aircraft carrier.

But the rest of these cabinets...

from top to bottom, is filled with nothing

but the compiled data of your escapades

on land, on sea, and even in the air.

But this time, I warn you,

Frederick Hazlitt Brennan (September 23, 1901 – June 30, 1962) was an American screenwriter of more than thirty films between 1929 and 1953 and the director of the ABC/Desilu western television series, The Life and Legend of Wyatt Earp (1955-1961), starring Hugh O'Brian as deputy Marshal Wyatt Earp. Born in St. Louis, Missouri, he was educated at the University of Missouri in Columbia and began his career as a newspaper reporter. He wrote many short stories and was published in The Saturday Evening Post, Collier's Weekly, and other magazines. He published several novels and wrote for the theatre including the play The Wookey, which ran on Broadway. He died in Ventura County, California, from a self-inflicted gunshot wound, and was survived by his three children. more…

A Girl in Every Port