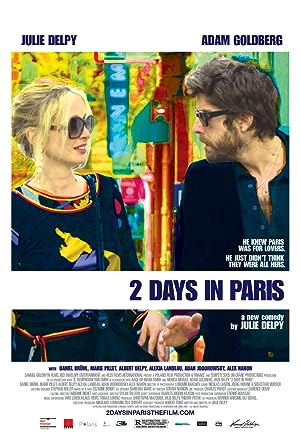 Synopsis: 2 Jours - 2 Days follows two days in the relationship of a New York based couple - a French photographer Marion and American interior designer Jack - as they attempt to re-infuse their relationship with romance by taking a vacation in Europe. Their trip to Venice didn't really work out, - they both came down with gastroenteritis. They have higher hopes for Paris. But the combination of Marion's overbearing non-English-speaking parents, flirtatious ex-boyfriends, and Jack's obsession with photographing every famous Parisian tombstone and conviction that French condoms are too small, only adds fuel to the fire. Will they be able to salvage their relationship? Will they ever have sex again? Or will they merely manage to perfect the art of arguing?
Genre: Comedy, Drama, Romance
Director(s): Julie Delpy
Actors: Adam Goldberg, Julie Delpy, Daniel Brühl, Marie Pillet
Production: Samuel Goldwyn Film/Red Envelope
2 wins & 5 nominations.

Arrondissement, grew in the 14. on

and lived after it

Until I moved to New York.

I am called Marion and am a photographer.

I see not much namely.

My retina already was

small holes full in my birth.

How can I describe what I see?

That is she/it, my world-view.

Everyone sees the world actually different.

However, I have reached one for her after it,

That is Jack. He/it is an inner-architect.

He/it said this with our third Date.

I found this very sweetly.

Look once, the light!

I am the photographer, but

he/it took all photos on the trip.

Every moment was digitized

and perpetuate, from each corner from.

What does lhr actually photograph friend?

Renewed assassination of the almost-food-chain

Burger King... - Be able to tell by the sound this of you!

Once again fires in 'nem almost-food!

and last month a supermarket.

Something is alleged in their meat.

It is here right.

- Exactly. Straight ahead, in the first floor.

- Exactly. Straight ahead, in the first floor.

You probably create this, however.

Need long for her!

However, already by 9 arrived Lhr.

Yes, but jams were everywhere and

Strikes. Chaos always is in France.

What? The exploited suffering shall-

sisters not once can go on strike?

We are not in America here!

And once again this giant-suitcase!

You still break the back yourself!

Julie Delpy (French: [ʒyli dɛlpi]; born 21 December 1969) is a French-American actress, film director, screenwriter, and singer-songwriter. She studied filmmaking at New York University's Tisch School of the Arts and has directed, written, or acted in more than 30 films, including Europa Europa (1990), Voyager (1991), Three Colors: White (1993), Before Sunrise (1995), An American Werewolf in Paris (1997), Before Sunset (2004), 2 Days in Paris (2007), and Before Midnight (2013). She has been nominated for three César Awards, two Online Film Critics Society Awards, and two Academy Awards. After moving to the United States in 1990, she became an American citizen in 2001. more…

Discuss this 2 Days in Paris script with the community: