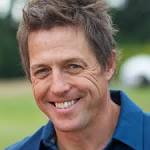 Hugh John Mungo Grant (born 9 September 1960) is an English actor and film producer. Grant has received a Golden Globe, a BAFTA, and an Honorary César for his work. As of 2018, his films have grossed a total of nearly US$3 billion worldwide from 29 theatrical releases. He first received attention after earning the Volpi Cup for his performance in the film Maurice (1987) but achieved international success after appearing in Four Weddings and a Funeral (1994). He used this breakthrough role as a frequent cinematic persona during the 1990s, delivering comic performances in films such as Notting Hill (1999) and Mickey Blue Eyes (1999). For Four Weddings and a Funeral, Grant won the Golden Globe Award for Best Actor - Motion Picture Musical or Comedy and the BAFTA Award for Best Actor in a Leading Role. Grant's starring role in Four Weddings and a Funeral, and his high-profile relationship with then-girlfriend Elizabeth Hurley who accompanied him to the Los Angeles premiere, made him one of the best known figures in cinema, and he was seen as a charming, vulnerable, witty romantic lead. By the turn of the 21st century, he had established himself as a leading man, skilled with a satirical comic talent. In the early 2000s he expanded his oeuvre with critically acclaimed turns as a cad in Bridget Jones's Diary (2001), About a Boy (2002), Love Actually (2003), and American Dreamz (2006). He later played against type with multiple roles in the epic sci-fi drama film, Cloud Atlas (2012). He is also known for appearing in period pieces such as The Remains of the Day (1993) and Sense and Sensibility (1995). Most recently, he received critical acclaim for his portrayals of St. Clair Bayfield in Florence Foster Jenkins (2016); Phoenix Buchanan, an antagonist in Paddington 2 (2017); and Jeremy Thorpe in the BBC One miniseries A Very English Scandal (2018). He was BAFTA-nominated for all three performances, and received Golden Globe Award nominations for Florence Foster Jenkins and A Very English Scandal.

Share your thoughts on Hugh Grant's movies with the community: