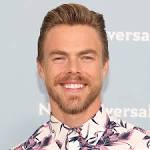 Derek Hough (; born May 17, 1985) is an American professional Latin and ballroom dancer, choreographer, actor and singer. Since September 2007, Hough has become known for his work on the ABC dance-competition series, Dancing with the Stars, on which he has won a record six seasons. With a total of nine nominations, he has won two Primetime Emmy Awards for Outstanding Choreography for several routines that he choreographed for the show. Hough has also starred in various stage productions, including the 2006 original production of Footloose: The Musical at the Novello Theatre in London's West End, as well as the 2015 New York Spring Spectacular at Radio City Music Hall in New York City. In 2013, he starred in Make Your Move, a Romeo and Juliet-inspired South Korean-American independent dance film. As of 2014, he has held a recurring acting role on ABC's musical-drama, Nashville. On December 7, 2016, Hough played the role of Corny Collins in NBC's live musical TV-production, Hairspray Live!. In May 2017, Hough joined the judges table in NBC's new dance competition series World of Dance. He continued his role as a judge for the second and third seasons.

Share your thoughts on Derek Hough's movies with the community: